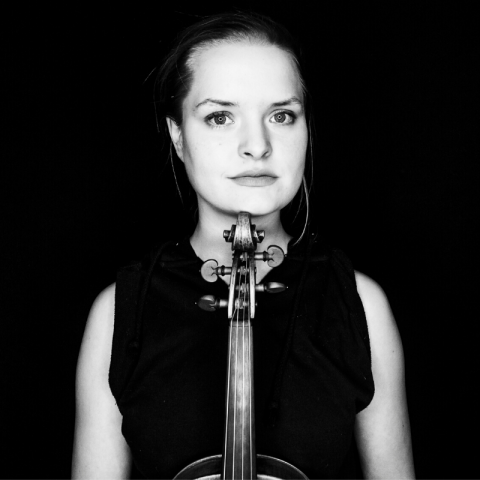 Violinist Constanze Friedel is the winner of the Ö1 Jazz Scholarship 2020, making her the first woman to join the ranks of the talents supported in this way, which so far includes Carinthian saxophonist Robert Unterköfler (winner 2018) and Upper Austrian drummer Lukas Aichinger (2019).

Friedel was able to convince the jury, which was made up of guitarist Wolfgang Muthspiel, US producer Jeff Levenson and Ö1 jazz editor Andreas Felber, with a powerful, expressive violin tone, a sense of dramaturgy both in her improvisations and in the compositions, as well as an openness to the most diverse musical influences and their merging into a vital, energetic amalgam. The winner will receive a two-year master's degree at the Jam Music Lab Private University in Vienna.

The Ö1 Jazz Scholarship has been awarded since 2018. Musicians up to 28 years of age with Austrian citizenship or living in Austria can apply.

Constanze Friedel was born in 1993, she comes from Ilmenau in the German state of Thuringia. From autumn 2012 she studied classical violin at the Hochschule für Musik "Carl Maria von Weber" in Dresden, but felt increasingly restricted in this music. At the same time she immersed herself in the world of improvised music in Dresden with the students of the jazz department, for which she became increasingly enthusiastic. Friedel: "I wanted to be free. At least freer than in classical music." The decision to study jazz violin was followed by a move to Vienna in autumn 2014: Carinthian violinist Christoph Mallinger, who commutes between Austria and Barcelona, taught there. Constanze Friedel wanted to take lessons with him at the Jam Music Lab, as she liked the "expression and phrasing" of his playing very much. In addition, she took "Improvisation" as her second main subject with pianist Paul Urbanek.

The violin has a long tradition in jazz, Constanze Friedel mentions as a first reference Zbigniew Seifert, the Polish violin virtuoso who died young in 1979. Then the names of the African-American pioneers Eddie South and Stuff Smith are mentioned, as well as the French violinist Didier Lockwood and the younger representatives Zach Brock and Adam Bałdych, whose music she has studied. But she also likes to be inspired by wind instruments, by saxophonists like Chris Potter, Joshua Redman or John Coltrane as well as trumpeters like Roy Hargrove.

Constanze Friedel has gained scene experience in Vienna as a guest of the gypsy-swing-oriented Yamandu Fuchs Quartet as well as in the band Barakah, founded by saxophonist Anton Prettler and drummer Sherif Abdalla, who will release their debut album "Page Zero" in mid-July 2020. Friedel has meanwhile left Barakah, her full concentration is now on her "Constant Quartet", which tends more towards fusion and rock, but also works with so-called "odd meters" (odd time signatures) and classical elements.

Giving this band project, initiated in 2019, a creative boost was one of the motivations for applying for the Ö1 jazz scholarship, according to Constanze Friedel. But she also wants to add the master's degree at the Jam Music Lab Private University out of appreciation for the teachers Christoph Mallinger and Paul Urbanek: "I can still learn a lot from them. "

The Ö1 jazz scholarship certificate will be presented to Constanze Friedel on the evening of July 6, 2020 at Porgy & Bess in Vienna.