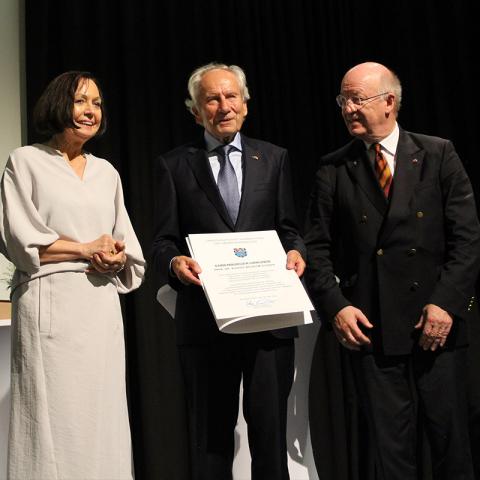 Mayor Uwe Conradt: "It is a great honor for me to include Professor August-Wilhelm Scheer in the ranks of Saarbrücken's honorary citizens. His commitment to business, science and entrepreneurship is outstanding and has always been associated with the courage to dare something new. He is a role model as a company founder and entrepreneur and has been a motivator and companion for founders for decades. August-Wilhelm Scheer is equally committed to promoting art and culture. His biography shows us what citizens can achieve in our society. By awarding him honorary citizenship, Saarbrücken is highlighting August-Wilhelm Scheer's outstanding services to the state capital."

"Through the loyal cooperation of application-oriented research, creative entrepreneurship and committed politics, I see Saarbrücken at the center of the necessary transformation of Saarland into an attractive science and business location. I will continue to devote all my energy to this goal," said Professor August-Wilhelm Scheer, founder and sole shareholder of Scheer Holding, in his acceptance speech on receiving honorary citizenship.

Appreciation of a life's work in the state capital Saarbrücken

The evening's laudatory speech was given by University Professor Dr. Margret Wintermantel, Chairwoman of the University Council of Saarland University. "I would like to congratulate both August-Wilhelm Scheer and the city of Saarbrücken and am very pleased about this sign of solidarity, because I experience August-Wilhelm Scheer not only as a successful entrepreneur and scientist, but also as a wise advisor in all strategic questions concerning our science and innovation location."