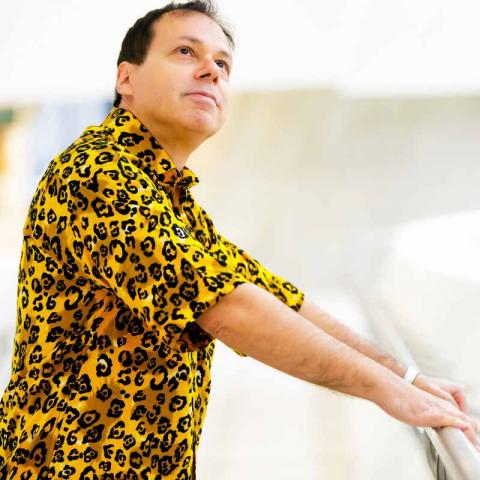 This course is an introduction to the potential and the creative possibilities and challenges of intercultural musical cooperation in general, as well as to basic concepts of African music and ethnomusicological research. Students are invited to participate creatively and practically based on the concepts and methods presented.

In addition to the lecture series, ensembles will be set up to implement the students' work.

The composer, drummer and electronic musician Lukas Ligeti has been working regularly for over 25 years in countries such as Côte d'Ivoire, Burkina Faso and South Africa with traditional as well as jazz and pop musicians on experimental music projects that combine African traditions with the latest international trends as well as specially developed, original styles . CDs of these projects appeared on labels in Germany and the USA and also led to “crossovers” with symphony orchestras, dance companies, etc.

Lukas Ligeti is a composer and improvising musician (drums, electronics) and a guarantor for new, completely independent music for ensembles of contemporary music as well as in jazz and world music up to sound installations. After studying at the MDW, he moved to the USA, where he lived for a long time as a freelance artist in New York and became a central member of the international experimental music scene. Since 2015 he has lived in California as a professor at the University of California, Irvine. He received a PhD from the University of the Witwatersrand in Johannesburg; he also taught there and at the University of Ghana. In 2010 he received the Herb Alpert Award, one of the most important American art prizes. As a composer he has received commissions from the Ensemble Modern, Kronos Quartet, MDR Symphonieorchester Leipzig, American Composers Orchestra, Eighth Blackbird (Chicago), Bang On A Can (New York), Armitage Gone! Dance (New York), Ars Musica (Brussels), the Wiener Festwochen, ORF, Radio France and the Goethe-Institut. As a drummer he worked with various bands of his own but also with John Zorn, Marilyn Crispell, Bill Laswell, Elliott Sharp, Michael Manring, Jonas Hellborg, John Tchicai, Henry Kaiser, Wadada Leo Smith, DJ Spooky, Pyrolator, Fritz Novotny and many others, as well as with Members of bands like Sonic Youth, Wilco and Grateful Dead. As a solo improviser on the electronic percussion he gave concerts on 5 continents. He has been working regularly in Africa since 1994 and is co-founder of the experimental groups Beta Foly (Ivory Coast, 1994-99) and Burkina Electric (since 2004). “That Which Has Remained… That Which Will Emerge…”, a “performed sound installation”, composed and realized in 2015 as artist-in-residence at the POLIN Museum of the History of Polish Jews, will be released in March 2021 as a CD by col legno. Information: www.lukasligeti.com