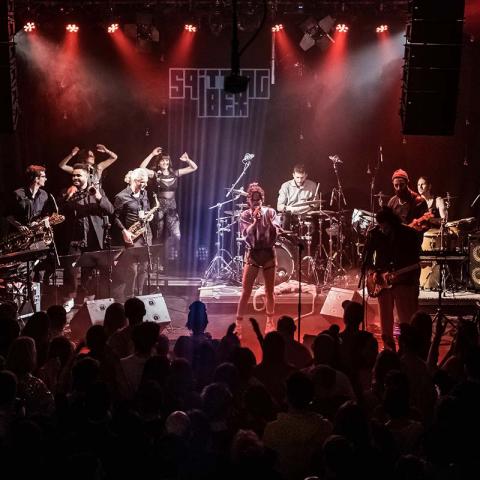 The Vintagesound of Spitting Ibex
The Viennese band Spitting Ibex with its singer and JAM MUSIC LAB alumna Tanja Peinsipp translates the funk of the 1970s into the present. In their new album "E.G.O." they have processed the time of the CoV pandemic. The very personal lyrics are about isolation, lack of perspectives and being thrown back on oneself.

"Incredibly funky in the most danceable sense, this band has been bouncing around the clubs for many years. But on their 6/8 time ballad "The Seeds of Your Sorrow," released as a precursor to a second album and drenched in dramatic strings and horns straight from Memphis, Spitting Ibex work their way from the party band's ancestral default (see tunes like "Let it Go" or "Mr Operator") in a political direction: "All I can see / People are blinded by their anxieties / Prisoners of hate, the slaves of major insecurities / You will reap what you sow / The seeds, the seeds of your sorrow," Tanja "Aunty" Peinsipp, who emerges from inside a shell in the accompanying, richly disturbing video, sings her lament about the latent aggression of a society devoted to hatred and addiction to division and conflict. In the final scene, she sits at the banquet as a feathered queen, while at her side - after a slippery food fight - bassist Florian Jauker smashes a wine bottle on guitarist Florian Kittner's head and then films himself with his cell phone in front of his slumped, defeated form. Meanwhile, keyboarder Valentin Zopp murks drummer Alexander Distl with a dinner knife: "The eternal temptation of anger and fear." Thank God it's all just theater, but similarities with real or online life are noticeably intended. Great music for legs and brain." (Robert Rotifer FM4)