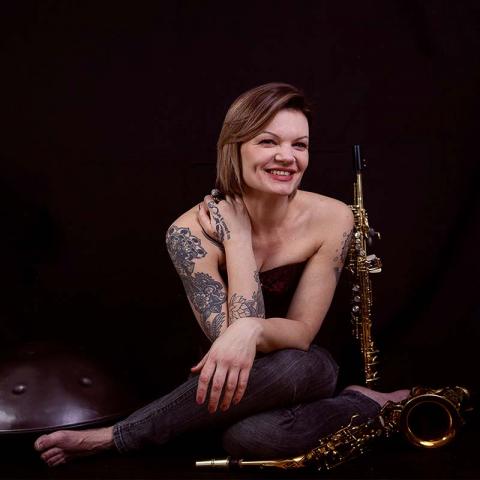 Jasna Joviċeviċ is an internationally recognized saxophone, bass clarinet, flute player and composer from Serbia. She performed her work around Europe, USA and Canada on various national and international festivals. Jasna received her BA from Franc Liszt Music Academy in Budapest, and MA in composition from York University in Toronto; currently a PhD candidate in the Transdisciplinary Studies of Contemporary Arts and Media, at the University in Belgrade working on her artistic research in music dissertation.

Jazz historians, music journalists, critics, cultural workers, and producers in the music industry, most of them men, are those who define, control and empower stereotypes in jazz, designing jazz as a field of power, or forming a narrative of "dominant jazz discourse." This field did not involve women for a long time. Throughout jazz history, women have always been less represented, successful, followed and noticed on the scene. In order to be recognized by media and to participate freely, jazz woman has to present and adjust herself in an already familiar model that is recognized and positively valued by the outside world. In the jazz discourse, woman is labeled as “different” or “other,” compared to the “real” and “the one”, to a man. Each culture gives meanings to the different positions in the classification system. Belonging or not belonging to a given society is determined by the relative power of the group in that society that designates itself as a central place. So, woman in jazz remain as the "other," peripheral or rejected. The field of dominant jazz discourse is the male field of power.

A sense of the past becomes naturalized and history is presented as fixed and unchanging, so are the certain identities, roles and stereotypes.  What jazz means is very much dependent on cultural perspective, or the values that are expressed in different times and places.  It also means that in different circumstances this history is read differently, with new meaning and critic.

Since the 1980s, the presence and imbalance of women on the world jazz scene has been detected, researched, classified, analyzed and criticized. The jazz feminists and historians note that it is very difficult to construct a history of narrative involving women's bands and female musicians based on conventional standards that make jazz history. It is necessary to include the oral history of the period as there are major omissions by jazz historians and jazz critics. It is important to consider the female voice and be ready and eloquent to rewrite and interpret the jazz history in different light.

During the presentation, I will serve with the music and video examples, interviews and testimonies about the subject, from the past and today.  The last part will be a group discussion, Q&A about the subject.

Jasna Jovićević (1976 Serbia) earned her BA in jazz saxophone at the Jazz Department of the Franz Liszt Music Academy in Budapest, and her MA in composition from the York University in Toronto; currently a PhD candidate in the Transdisciplinary Studies of Contemporary Arts and Media, at the Faculty of Media and Communication, Singidunum University in Belgrade working on her artistic research in music dissertation. She also studied in the US, Brazil, and Austria. She won several awards at competitions such as JEN Researching Award in Smithsonian Institute, AI Lab EU National Winner, Serbia Creates, Best Hungarian Jazz Composition, and artist residency scholarships in New York (ArtsLink, OMI), San Francisco (Djerassi, Giant Steps), Spain (Valparaiso), and Canada (the Banff Centre). She played with distinguished musicians, such as Hamid Drake, Mike Stern, Bojan Zulfikarpašić, Al DI Meola, Szakcsi Lakatos,  and others, performed at festivals all over Europe and Canada. She released solo albums “Invented Reality”, “The Sound of Birds”, “Travellers”, Jasna Jovićević Sextet-”Flow Vertical”, at the British record label FMR Records, “Music Action Women” in San Francisco, “Informal Shapes” with the Jovicevic/Miklos/Wojcinski trio, coming up with “Sounding Solitude” at Mascom Records, as well as played as a soloist and sideman on dozen other albums. In recent years, her works include multimedial performances and researches, as well as collaborations with dancers, visual artists and scientists. Jasna works as a professor of Music methodology and is a licensed hatha yoga instructor for over fifteen years. She studied yoga in in India (Bihar School of Yoga) and is specialized in Nada yoga- the yoga of sound.

She is the author and a leader of the artistic education projects for children and contemporary arts, through her civil society organization “Artrust”. The awarded artworks “Flow Vertical” and “I Sit and Worry about Her” ( Ars Electronica Festival) are engaged in the artistic research of biosignal driven music. Her original work is based on the interdisciplinary approach into the musical improvisation, including neuroscience, soundecologies, and ecology aspects, socially engaged. As an activist in affirmation and promotion of female creativity in jazz music, Jasna is the founder of all-female big band New Spark Jazz Orchestra- Balkan Women in Jazz (www.nsjo.org ).