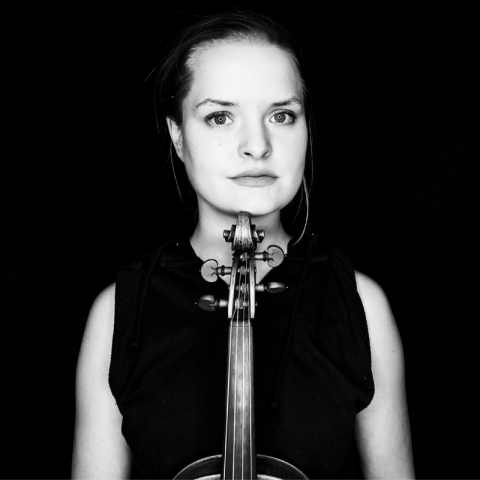 Born in Ilmenau in the German state of Thuringia in 1993, the talented violinist studied classical violin at the Hochschule für Musik "Carl Maria von Weber" in Dresden from fall 2012, but felt increasingly constricted in this music. At the same time, she immersed herself in the world of improvised music in Dresden with the students of the jazz department, for which she became increasingly enthusiastic: "I wanted to be free. So at least more free than in classical music."

The decision to study jazz violin was followed by a move to Vienna in the fall of 2014: because that was where the Carinthian violinist Christoph Mallinger, who commutes between Austria and Barcelona, was teaching, with whom Constanze Friedel wanted to apprentice at the JAM MUSIC LAB, since the "expression and phrasing" of his playing appealed to her very much. In addition, she took "improvisation" as a second major with pianist Paul Urbanek.

Constanze Friedel gained scene experience in Vienna so far as a guest of the gypsy-swing-inspired Yamandu Fuchs Quartett as well as in the band Barakah, founded by saxophonist Anton Prettler and drummer Sherif Abdalla, which will release its debut album "Page Zero" in mid-July 2020, and in whose music oriental influences merge with the powerful hymnody of John Coltrane.

Friedel has since left Barakah, and her full concentration is now on her "Constant Quartet," in which the violin takes its cue from a saxophone in "sound and assertiveness," and which tends more toward fusion and rock, but also works with so-called odd meters, borrowings from Arabic music and classical elements.

As a winner of the Ö1 jazz scholarship in 2020, Constanze received a 2 year master's program at JAM MUSIC LAB.

Find out more about the Constanze Friedel Quartett on YouTube and about Constanze as a musician here.